After "Litanie contre la Peur" comes “Invincible,” the second Fear Inoculum song Tool debuted live. The crowd at Welcome to Rockville experienced the song’s inaugural performance back in May, getting blasted with a 12-minute baptism of extreme catharsis.
Fear Inoculum’s fifth track, “Legion Inoculant,” is a transitional piece between “Invincible” and “Descending.” Don’t listen if you’ve ever been abducted by aliens… this track will give you unpleasant flashbacks.
“Descending” has been a part of fans’ lives for nearly four years. Tool debuted an infant version on Halloween 2015, performing it dozens of times before finally revealing its final evolution earlier this year. The studio version is yet another Fear Inoculum piece that surpasses 10 minutes in length.
The seventh entry of Fear Inoculum is titled “Culling Voices” and it precedes a giant Danny Carey drum feast called “Chocolate Chip Trip.” Though “Chocolate Chip Trip” isn’t a conventional Tool song, the band does not consider it a segue.
Fear Inoculum’s ninth track, and final full-length piece, is called “7empest.” This is the epic marathon cut you’ve been hearing about for ages. “7empest” is roughly 20 minutes long, heavy as hell, and absolutely packed with riffs from Adam Jones.
Finally, “Mockingbeat” closes out the album with a final, short, segue featuring nature sounds. 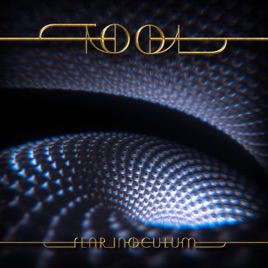