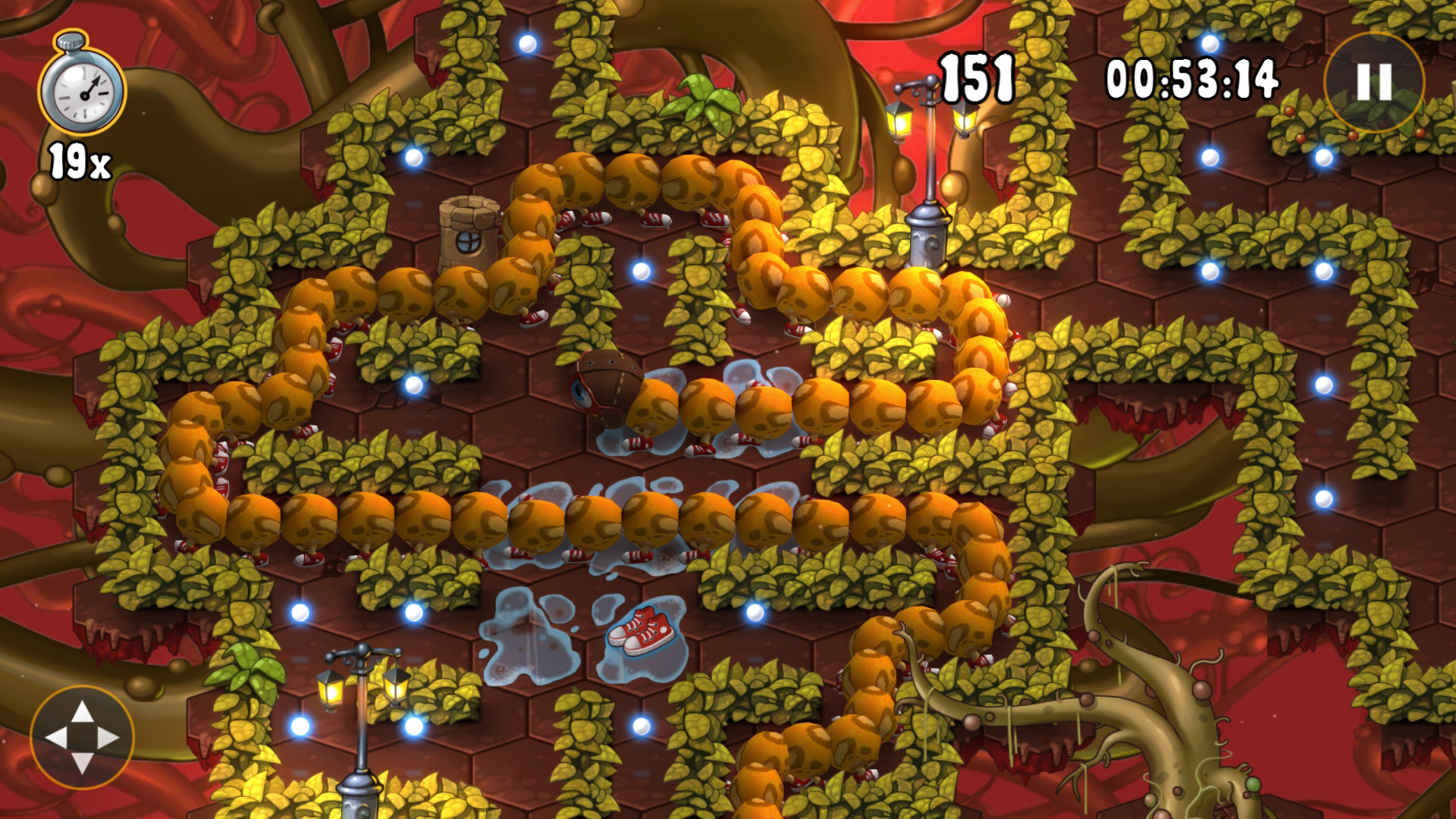 A joyful, casual puzzle game that will tease both your wits and your memory!

You've always dreamt of flying. Roaming high in the clouds, free from all worries. Just gliding through air like a bird. Unfortunately, you were born as a millipede, and your best chance of launching to the sky is probably in some crows mouth... or is it?
Rumor has it that the local Aviation School is accepting new recruits for a pilot course. Seeing an opportunity to make your dreams come true, you seize the moment and embark on a journey of your life. Your path is full of dangers, mazes and obstructions, but the end goal is more than worth it!

Control a millipede, roaming through over 90 diverse levels. Solve the elaborate mazes laying on your way. Gather and use multitude of power-ups that will help you with your struggles. Enjoy three types of immersing mini games. Grow bigger and bigger; and remember: try not to eat your tail. 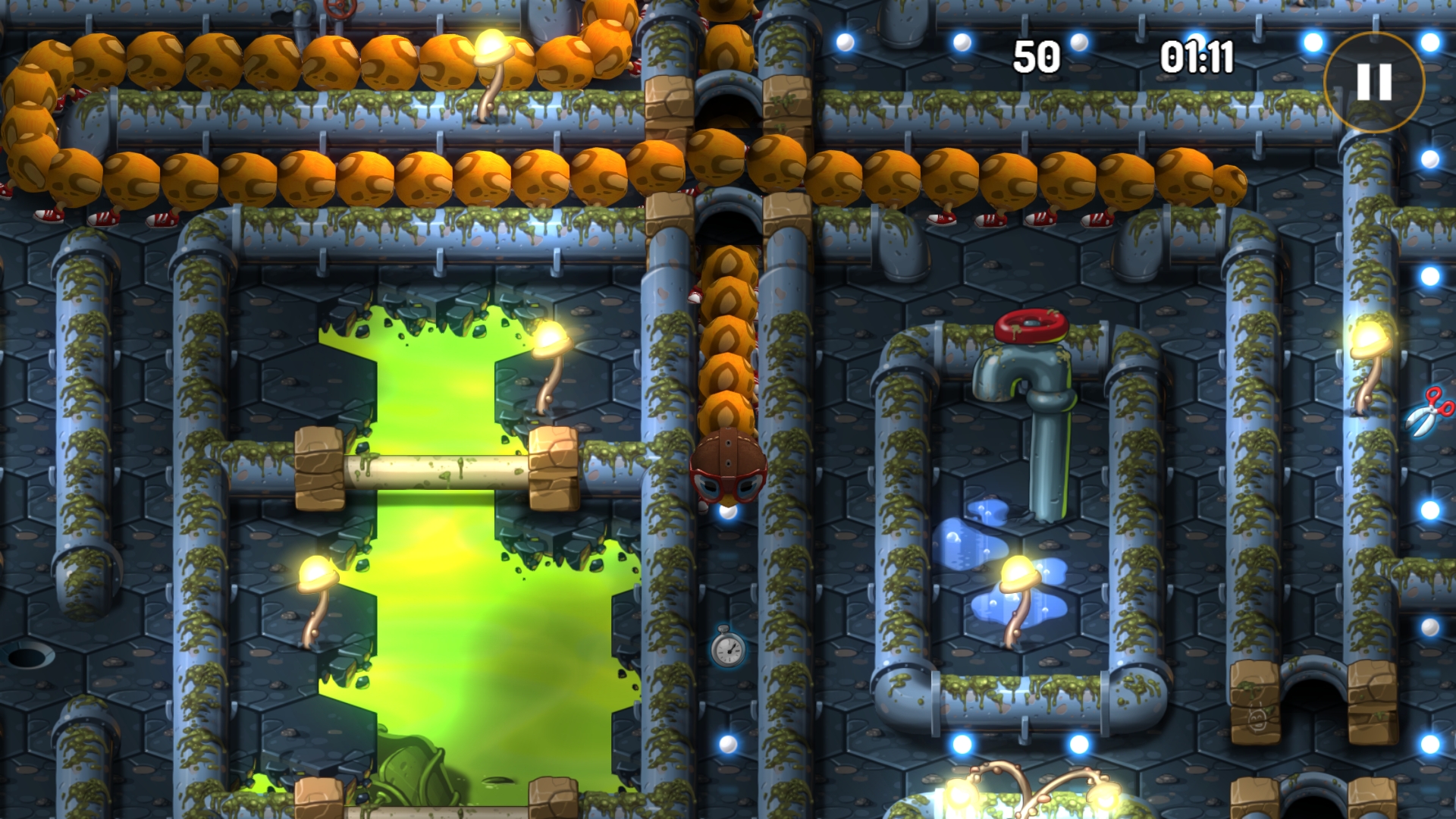 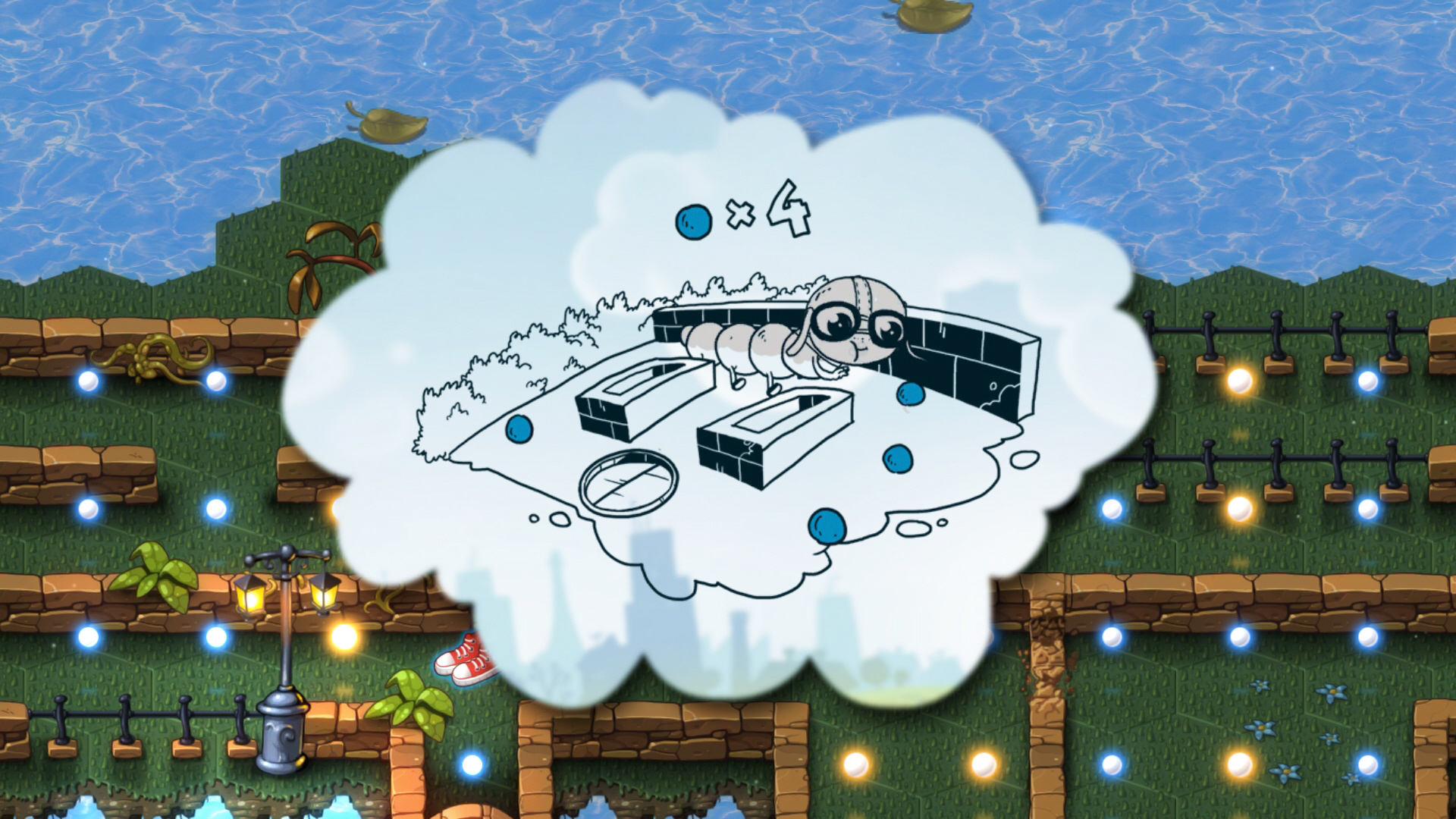 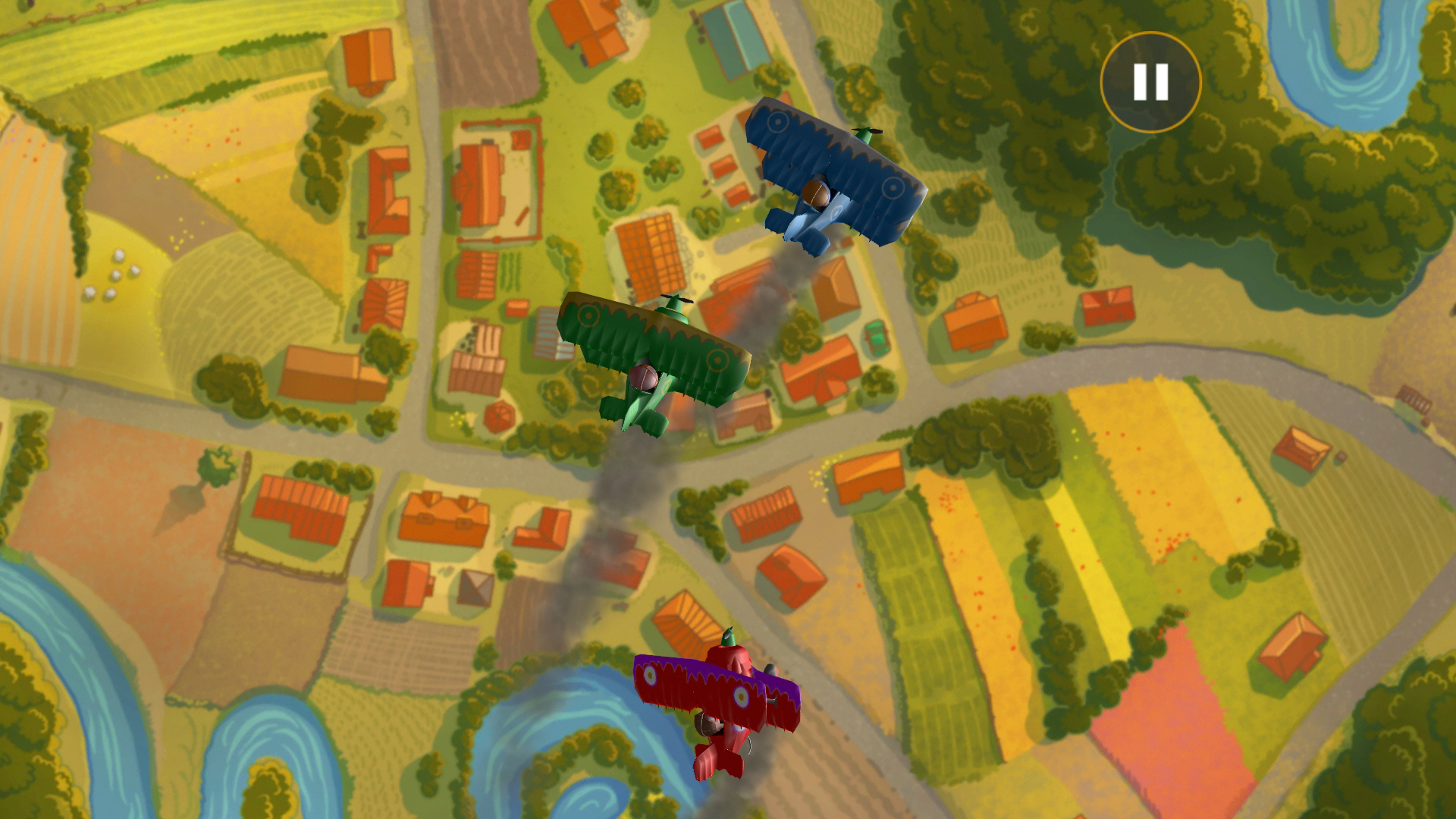 This is more a mixed review than a negative one.

The gameplay is basically Snake, but in Pac-Man-styled levels. Navigate mazes filled with corridors, collect all the pellets, and reach the exit, all without running into your own body, which elongates as you eat pellets. Familiar with Rattlesnake from Windows Entertainment Pack, which I recall had easier levels, I wanted to see how this compared.

It was fun for me in the beginning, but this was because the levels started out small enough that you could see the entire playing field on screen at once. By the time you access world 2 of 3, they become so big that even the zoom button won't show you the whole thing. This is important, because as you progress the levels become trickier, with more bottlenecks that you have to identify and clear early before emptying the rest of the stage. So, there's an increasingly heavy trial-and-error aspect that I don't really like. In addition, Millie's body becomes so long in these larger levels that, in order to eat those last few pellets you're missing, you have to take the long way around the whole area multiple times, just to avoid running into yourself. I've gone from taking 1 or 2 minutes to clear a stage, to taking multiple 5-minute attempts to clear just one, and I'm not even halfway done with the game as of this writing.

The zoom button pauses gameplay, and because the default camera is often zoomed in too close to anticipate bottlenecks and such, you'll have to zoom out constantly to make sure you aren't going down the wrong path. Not only does this make the pacing tedious, it suggests the developers wanted to enforce a memory aspect, which again is something I don't really like.

There are powerups, like hammers that break cracked walls and sirens that let you go both ways on one-way streets. I was hoping these would add variety to the levels, since there are nearly 100 of them, but they never seemed to make enough of a difference in the gameplay. They activate instantly upon pickup and last less than 30 seconds, so you have to know where to use them first, but again, since the levels become so large, you often have to make a preliminary attempt just to discover all the noteworthy areas. I feel the levels become challenging less by creative use of different mechanics, and more by increasing level size and number of bottleneck areas.

If the premise interests you, and the above points don't bother you, go ahead and give it a try. Otherwise, be warned that it becomes much more difficult than the mood of its trailer suggests.. It's a really relaxing and sweet puzzle! I don't regret buying it since it brings such a fresh flavour to these kind of games. I recommend it sincerely if you like colourful things and want to play something that doesn't include zombies, survival or open world horror. I sure do.. Not much to say, it's pretty much as-advertised. Snake meets Pac-Man. Nothing to write home about, but it's a nice little arcadey diversion.. Rarely do I not enjoy a puzzle game, but Millie was a disapointment.

Essentially just a new take on Centipede, it is annoying more than anything else and when it gets difficult it feels like a matter of trial and error rather than actual puzzle solving or forward thinking.

For what it is trying to be, Millie fails miserably, and doesn't succeed in any other catagory to boot.

3\/10. The concept seems fun and the game is surprisingly challenging, but there is one thing I just can't get past. You permanently lose items (scisors to shorten you, clock to reverse time, etc.) you used in a level even if you failed and restarted it.
Sure, you can buy them, but you'll probably run out of stars eventually when you hit a difficult level.
I don't recommend this game unless you're a pro at snake, have very good memory or just want to torture yourself.. Millie is a blast to play, for the first couple of hours and if you need some time without having to think. It's a kind of remake on a large scale of the well-known snake-games, where you have to eat your way through labyrint-like levels of increasing difficulty and complexity. While Millie eats her heart out, she grows longer and longer, and so there is an ever-increasing chance of eating ... your own tail. Happily, there are several means provided to make life a bit easier: there are clocks to rewind the time, hammers to smash through walls and even scissors ... to cut a bit off your own tail. Ouch.
By going through tons of levels, one can obtain stars (needed to buy the extra items), and shoes. With these shoes, one unlocks new levels. Quite simple, well-tried, and still effective. Graphics are nice and colourful, sounds are pretty good - I love the sound of Millie eating ;-).
But it takes hours and hours to really progress through the levels, as some are really very difficult, and only the most stubborn will reach the end of it I suppose. I got bored after a couple of hours, but my daughter isn't yet ;-). The game has full controller support, which is nice, but the controls seems to be rather sluggish and get some time to get used too. All in all, a good game to kill some hours, but nothing more than that.

Overall: 67\/100. It's like the clasic Snake game, but with better graphics and a bit more interesting.. Millie is a game that resembles the Snake game found on old school TI-82 calculators, QBASIC, or cell phones. However, instead of an open screen, you are stuck in a maze picking up a bunch of dots like Pacman, minus the ghosts. You're given a few tools in your toolkit to help you along you way and you must finish the level by collecting a certain number of dots and a certain number of shoes. The game itself is perfect. It plays very well, the artstyle fits the genre of the game and makes it perfect for kids. The game towards the end takes a long time per level, which can make it frustrating when you are stuck or die and have to start all over. However, the story line is very mediocre. It's a story of a milipede that dreams to fly. So that means that every third level you find yourself in a flying game. The flying games are not well done and can be frustrating if you're looking to get a good score on them. Overall, the game is fun and I highly recommend it if you enjoy a casual snake like game.. mlg gaming all night long