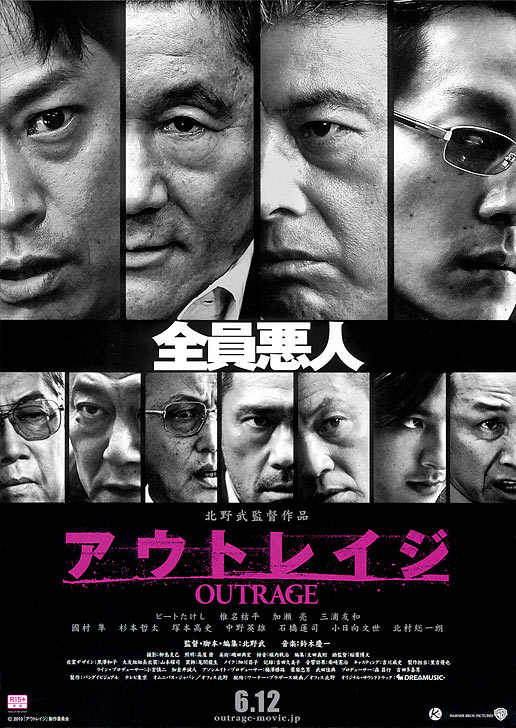 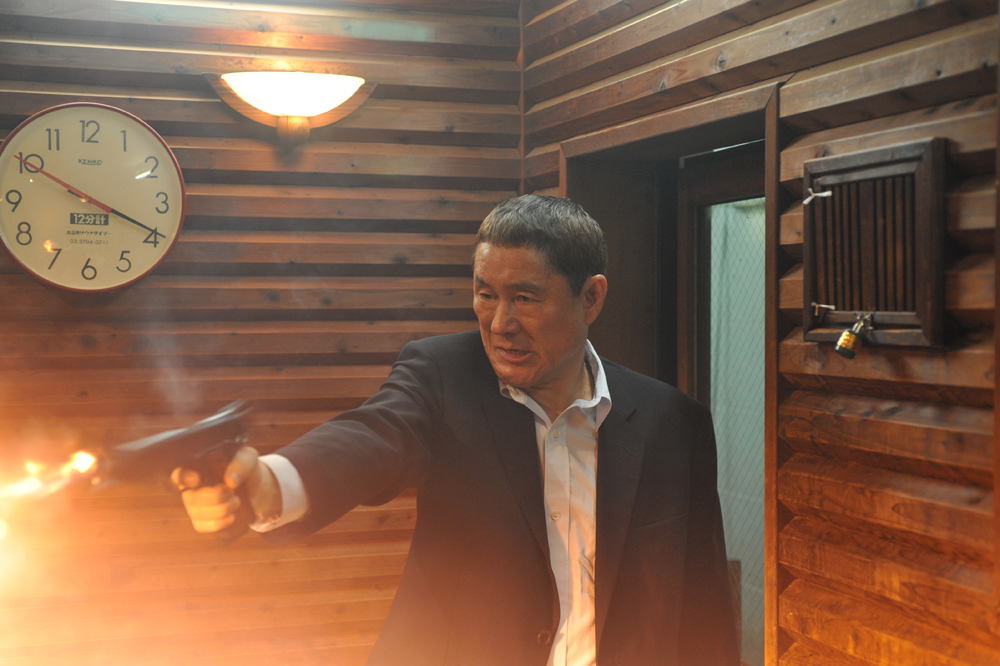 The boss of a major crime syndicate orders his lieutenant to bring a rogue gang of drug traffickers in line, a job that gets passed on to his long-suffering subordinate.
The movie begins with Sekiuchi, chairman of the Sannokai, a huge organized crime syndicate controlling the entire Kanto region, issuing a stern warning to his lieutenant Kato and right-hand man Ikemoto, head of the Ikemoto family. Kato orders Ikemoto to bring the unassociated Murase family in line for their drug trafficking business, as he knows that Ikemoto is Murase's sworn brother. Ikemoto immediately passes the task on to his subordinate Otomo, who runs his own crew. Ikemoto is suspecting that Sekiuchi has lost confidence in him and instructs Otomo to "shake up" Murase as to make it look like that have "a little quarrel". What ensues is series of violent events in between which everybody is trying to trick everyone behind his back for their own benefit.
Viewed at the Festival du Film, Cannes 2010

Takeshi Kitano's return to his familiar stamping ground, the Yakuza, their intrigues, vendettas and highly inventive ways of inflicting extreme unpleasantness on one another, was given less than a stellar welcome by critics at the Festival. A common refrain was that there was nothing new on offer here, no new insights, just a retread of the familiar. Well, they are right, but is that really such a bad thing?

I say no, not when we get tough guys, sharp suits, black humour, extreme violence (you might never want to visit the dentist again), a convoluted plot that is hard to follow but has something to do with rivalry, inheriting the reins of power and inflicting extreme violence on the other team. Oh yes, there's also betrayal and extreme violence.

Outrage is old-school Takeshi Kitano, a (for me) welcome return to his glory days, not that he ever left them behind (I've time for all his films, if not his gameshows). If you like the man, as actor or director, then you won't be disappointed by this film, just as long as you are not expecting something new and different, that is. I really wonder why there isn't more modern day realistic Yakuza films coming out of Japan. Perhaps it has something to do with the real Yakuza not being too pleased about that idea. I've read a few stories, and that's a strong possibility. Regardless, this film gives me something that i'd like to see more of. (And luckily we did with the sequel to this film being released recently)

Takeshi Kitano directs, writes, edits and stars in this film, which is quite impressive. I must say, he does a good job at all of these things. He creates a film that really feels like a look into the violent and backstabbing world of the Yakuza. It doesn't pull any punches, that's for sure. It also contains a scene that will make you fear the dentists office more than you may already fear it. Apparently Kitano wrote the death scenes first, and then wrote the story around it, which you may think would make for a terrible movie, but you would be wrong. The story is intriguing and full of betrayal. The movie also has a great soundtrack that has a very cool synth sound.

The performances are all quite believable. In the way that you feel like the actors in Goodfellas are real members of the mafia, Outrage contains actors whose performances would almost have you believe they we're real Yakuza. You have some real despicable characters, and the actors fill those rolls so well.

Overall, this is a film that is quite underrated when it comes to the gangster film genre. I would love to see more Yakuza films that have a similar style to this. Highly recommended to gangster movie fans. At its best, Outrage offers a meat-and-potatoes look at an age when battles of honor and humanity are AWOL in yakuza society. As things wind toward the inevitable hierarchical breakdown, however, the movie too often resembles a repetitive cycle of tough guys shouting, shooting and shuffling off this mortal coil.