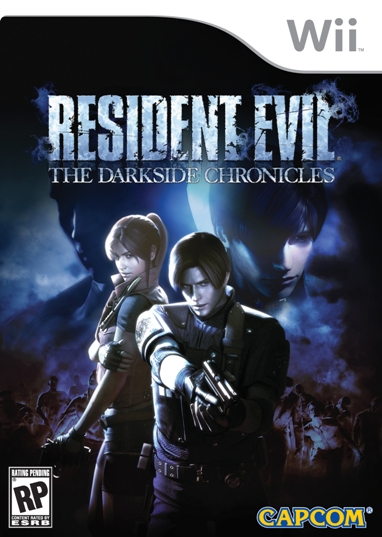 As Leon Kennedy and Jack Krauser investigate a series of disappearances in South America, the dark history of the events of Resident Evil 2 and Code Veronica come full circle.
After the success of Resident Evil The Umbrella Chronicles Capcom thought it deserve a sequel.

Resident Evil The Darkside Chronicles is more like the same game play as The Umbrella Chronicles where it's a arcade on rail shooter retelling the events of Resident Evil 2 and Resident Evil Code Veronica along with a original mission made for the game where Leon S. Kennedy and Jack Krauser where you're send on a mission in South America looking for a man named Javier Hidalgo who has been selling the stolen Umbrella BIO weapons.

Leon then tell Jack the story behind Raccoon City and his first time facing Umbrella along with Claire Redfield retelling the events of Resident Evil 2 as well as Claire's story from Code Veronica who along with a inmate named Steve try to survive the outbreak on the island.

Now the game does some impressive things for the sequel however there are some things that could have been done better.

First the game does a very good job with retelling the events of Resident Evil 2 and Code Veronica with staying true to the stories of the game and added some take to the story such as how Claire and Leon first met and how Steve became a prisoner. Along with Wesker working in the shadows where Chris comes to the add of his sister Claire.

Also the music stays true to the game such as the score used in Resident Evil 2 when you first enter the police station you get that same theme where you know where you are.

Also when it rains the rain drops actually hit the screen given the feel of actually being in the game.

The controls required you to use the Wii remote be quick when you're having monsters coming at you full speed so be quick to fire but the controls do work.

The problem with the game is really the camera, for some reason or another they thought it was a good idea to do the blair witch effect where the game would be bouncing all over the place making it easy to miss your target and take away your health.

Also targeting your enemy make it a challenge as well if you don't aim at the right spot your enemy will strike you without warning.

But nevertheless the game is one that does a very good job of giving fans of Resident Evil a extreme game that will test your gaming skills and make you want to do better.

So if you're a fan I say give it a shot and there are some so much to be had with this game.

I give Resident Evil The Darkside Chronicles an 8 out of 10 Not the RE2 remake I was hoping for, but I guess I'll have to deal with it. Although I'm glad it helps covers some areas that I've been wondering about since RE4: Primarily the gap of years between Code Veronica and RE4. I was really, really, really hoping they'd go all out and remake RE2 like they did for RE: Remake for these current gen systems, but who knows... I don't know how many times Capcom covered the Mansion incident, but I really hope Leon and Claire get some Next Gen treatment. Degeneration just didn't cut it for me.

Where's our RE2 Remake? You know, the highest-grossing RE title you EVER MADE????!