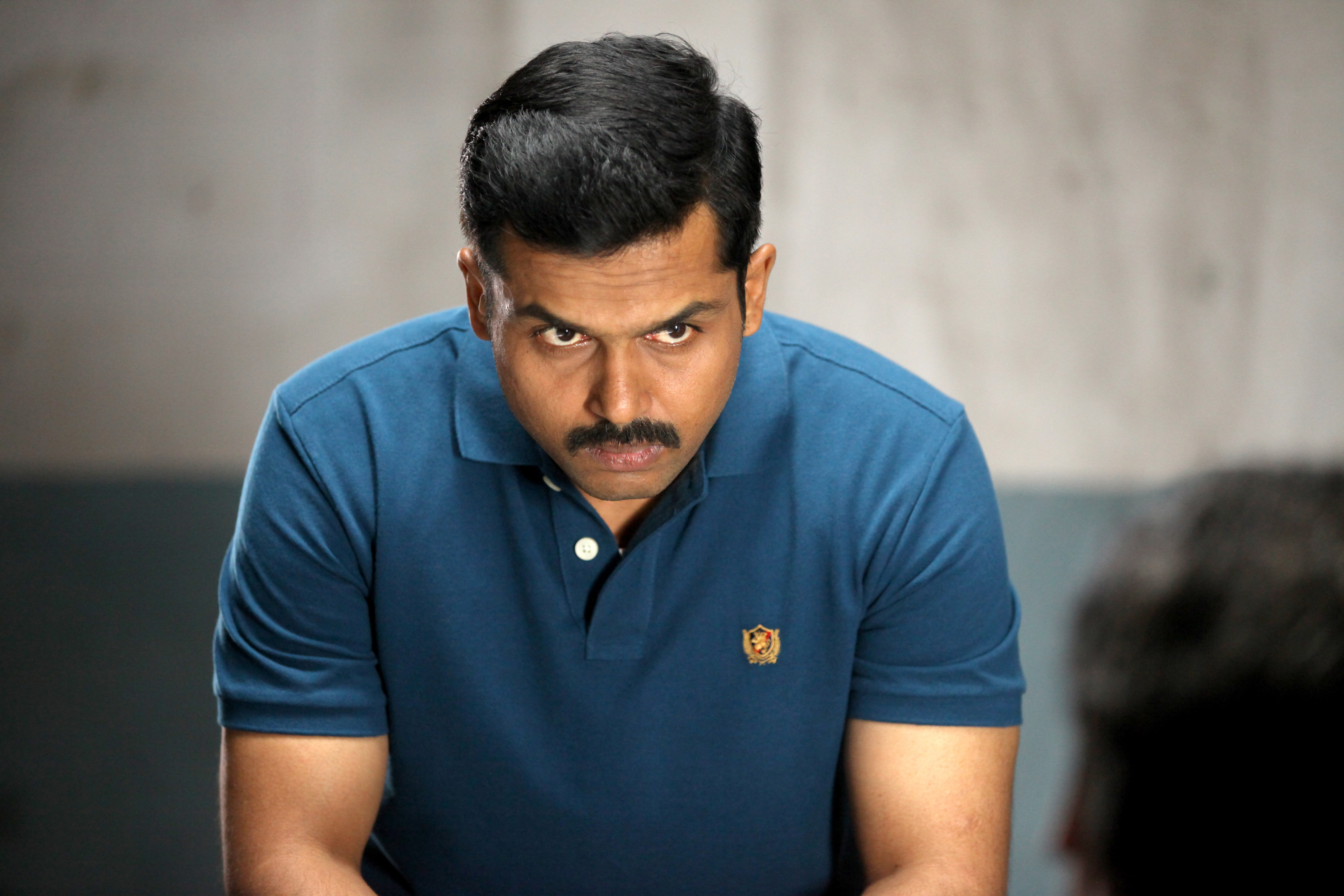 Theeran, a police officer, tries to decode a series of cold blood events based on same pattern.
An edge of the seat action thriller that tells story of Theeran Thirumaran- Deputy Commissioner of Police who investigated a series of events including dacoity, robbery and cold- blooded murders that occurred in National Highway roads across six states of India between 1995 - 2005. Based on "Operation Bawaria" of Tamilnadu Police Department.
In a seminal scene in Theeran-Adhikaram Ondru, DSP Theeran (Actor Karthi plays an upright police officer endowed equally with brains and rippling muscles) storms into a den of outlaws in the badlands of Rajasthan. He advises his team to stay inside the car as he walks on purposefully, the dusty hamlet is all eyes; it's the territory of Omah Singh, a much-feared highway dacoit responsible for a breakout of murders in rural Tamil Nadu. As the dust motes ripple upward in the desert air, Theeran slams one after the other until Singh sits up and takes notice, his hookah forgotten

The face-off defines the movie. Can a district police chief trace murders all the way to the North-West, surmount the crippling bureaucracy of multiple governments and bring to book a dacoit gang wreaking havoc on the crime numbers in TN? An emphatic Yes!

H Vinoth, who deftly portrayed the lives and tricks of a gifted conman in Sathuranga Vettai is telling us a cop story this time. The usual clichés are in order: Theeran is transfer magnet, courtesy his sky- high morals and commitment to policing. His stay-at-home wife (Rakul Preet) is content with chiding him now and then about not being home most days. He chooses to go after the criminals when a dilemma presents itself after he gets to know his wife is dying. Even during training days, Theeran shows signs of precocity – he knows how to handle a crime-scene weapon (We are informed the usual handkerchief method of securing it will not protect the prints! Theeran holds it between two fingers at points where the criminal might not have touched the weapon).

Neatly parted hair and a razor-sharp mush and almost-always wearing a dark shirt straining against his chest, Karthi looks every inch the ideal police officer. Assisted by a team of devoted cops, Theeran leads a national hunt for fingerprints that lead them into the history of Indian outlaws with origins in the British era. These huntsmen have no targets but gold, unless you leave out savagery. How Theeran bumps off each one of them form the crux of the story.

Negatives include a bit of drag in the scenes describing the Rajasthani outlaws, or when the action sequences gets a little too long – Theeran beats the villain to pulp in searing Rajasthani heat before dragging him through the desert sands on a horse! Classic. A few songs are plugged here and there in the movie and they pass without causing inconvenience. The background scores for the Dakotas are particularly effective in accentuating their bestiality. Overall, music director Gibran is very good in many parts.

The story itself rests on actual history. Dacoity at homes along the highways was a menace in Tamil Nadu during the late 90s. Apparently, Tamil Nadu had ranked high in taking it seriously and wiping such crimes off its map, although the policemen behind the job had gotten little credit.

True to that, Theeran spends the twilight of his career behind a desk, complaining about a rickety chair not replaced for months. A young officer having known his deeds drops by just to salute him, and Theeran betrays that old glint of uprightness still bright in his eyes.

After all these years? If you are Theeran, You would say "Always." The movie was excellent. One of the Best movie of Karthi. From this movie Karthi Became one of my best actor. Songs and BGM were excellent as usual Ghibran rocked. Everybody acted very well in the movie. The movie was very interesting and thrilling. But the unwanted song in the climax and the heroine sequences bored a bit. But the movie was excellent. Expecting more movies like this from Karthi and H.Vinoth and Team. This is one of the Best movie of 2017.