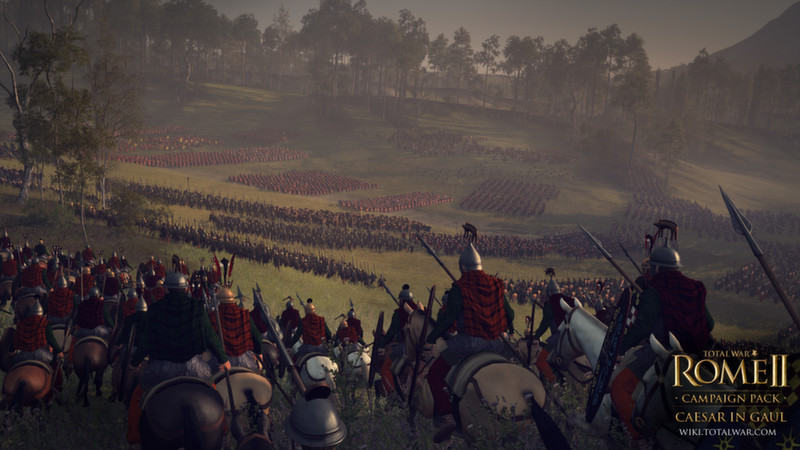 Caesar in Gaul is a standalone campaign pack for Total War: ROME II covering Julius Caesar’s war of expansion against the Gaulish tribes. Players can choose from four playable factions in this conflict: the Gallic Arverni, the Germanic Suebi, the Belgic Nervii and Rome, in a campaign inspired by Caesar’s Commentarii de bello Gallico (Commentaries on the Gallic war).

Offering a tighter scope in terms of time and geography than Rome II (58-51BC), the Caesar in Gaul Campaign Map is an expanded, more detailed vision of Gaul and the south coast of Britannia.

Compared with ROME II’s map of Gaul, Caesar in Gaul contains more regions and provinces, more factions (both playable and non-playable), and a series of famous generals and statesmen from history which the player will employ or fight against depending on their chosen faction.

A war of great profit and glory for Caesar, this conflict made him extremely popular with the people of Rome… though less so with the senators, who saw him gathering power to himself in a series of events that ultimately lead to his ascension to Dictator.

Caesar in Gaul differs from the core ROME II experience in a number of important ways:

The Caesar in Gaul campaign map is an enhanced, more detailed representation of Gaul, with players able to expand across 18 provinces dotted with resources, new settlements and new provincial capitals.

Many factions employ great generals and statesmen from history (for example, Rome fields Gaius Julius Caesar himself, Mark Anthony and others). Each of the four playable factions also has a faction leader who acts as the player’s avatar during the campaign.

As Caesar in Gaul deals with a considerably shorter time-span (58-51BC) than the grand sweep of the ROME II campaign, each turn represents two weeks rather than a year. This means seasons make a return. The gameplay effects of these aren’t always predictable however, and may vary from province to province. A late autumn may bring a good harvest for example, but a long, dry summer may damage your food production.

For those generals looking for a more rapid MP campaign game, Caesar in Gaul presents a series of interesting options. Due to the geographic scope and the opposing 48 factions, co-op or competitive 2-player campaigns are tighter, more focussed, and less time-consuming than a full Campaign.

For those players making it through to the mid-game, there will be new challenges to face as a more suitable replacement for the Civil Wars of ROME II. As a Gallic tribe, you’ll feel the mailed fist of Rome respond with heavy intervention forces, and as Rome, you’ll see the Gallic tribes rebelling and forming alliances against you.

Caesar in Gaul adds the Battle of Alesia as a playable historical battle. Alesia marked the turning point of Caesar’s Gallic War, and resulted in the capture of Vercingetorix, who was later taken to Rome and executed at Caesar’s Triumph.

Set from Caesar’s perspective, Alesia tasks the player with maintaining the siege of Vercingetorix's Gallic stronghold. The battle begins with the Roman forces deployed within their own investment fortifications outside the hill-fort. The player must guide the Romans as they weather attacks from both a huge relief army and within the fort itself.

Alongside the factions playable within the new Campaign, Caesar in Gaul also adds three new playable factions to the main game; they are:

•Nervii (barbarian, Belgic)
The most fierce and powerful of the Belgic tribes, the Nervii are a melting pot of Celtic and Germanic heritage. Their unit roster reflects this mix of cultures, opening up the possibility of creating new, unique army compositions.

•Boii (barbarian, Gallic)
One of the largest of the Gallic tribes, the Boii occupied Cisalpine-Gaul, Pannonia, Bohemia and Transalpine Gaul. Their numbers make them a force to be reckoned with but they are somewhat disconnected from other the Gallic tribes geographically and are directly exposed to the ferocious Germanic clans and the Dacians.

•Galatians (barbarian, Anatolia)
The Gauls of the East, the Galatians migrated to Asia Minor following the Celtic invasion of the Balkans. They arrived through Thracia at around 270 BC, led by generals Lotarios & Leonnorios. As Celts deep within Hellenic territory and factions hostile towards them, the Galatians offer interesting and challenging new gameplay.

•Sword Followers (sword infantry)
Where a lord commands, the sword is thrust.

•Veteran Spears (spear infantry)
Battle hardens the sinews and the heart, and deafens the ear to the cries of cowards.

•Galatian Legionaries (sword infantry)
The Celts have taught the Romans more than they're prepared to admit, but this is a two-way street.
•Galatian Raiders (javelin and sword cavalry)
Broken enemies know it is better to flee than face riders who will not spare their lives.

•Chosen Swordsmen (sword infantry)
These men fight with proven bravery and well-honed skill-at-arms.
•Chosen Spearmen (spear infantry)
Chainmail does not chill a warrior's heart, or still his lust for battle.
•Gallic Hunters (stealth bow infantry)
The skills of the hunt, hiding and a sudden strike, are the skills of a warrior.

•Fierce Swords (sword infantry)
Once he has earned it, a Celt will only be parted from his longsword by death itself.
•Guerilla Swordsmen (stealth sword infantry)
•These swordsmen strike wherever and whenever their enemies least expect.
•Mighty Horse (spear cavalry)
A strong mount and a savage swing make these warriors a fearsome prospect.
•Naked Spears (spear infantry)
Who needs clothes when you have more than your share of courage?
•Gallic Hunters (stealth bow infantry)
The skills of the hunt, hiding and a sudden strike, are the skills of a warrior. 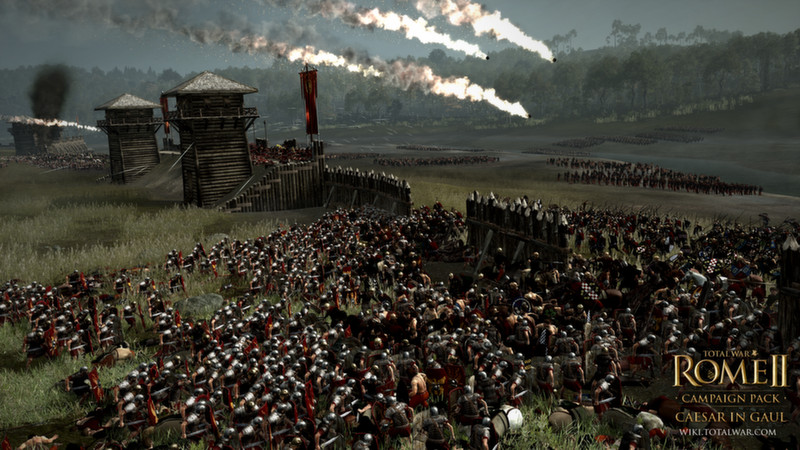 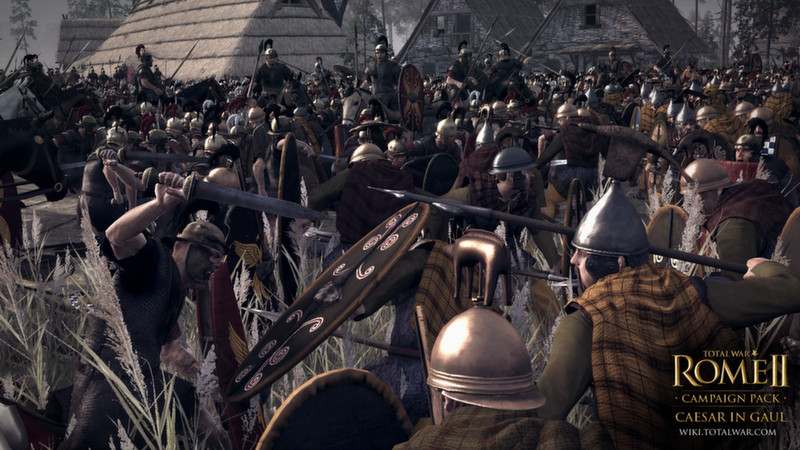 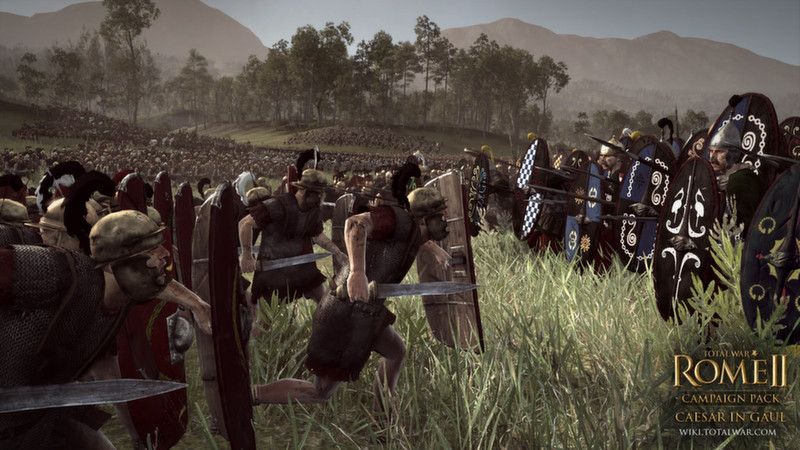 The only one worth getting. Not worth $15 tho, wait for a sale.. Very good DLC. Historically accurate locations and tribes. Many hours of Gamepplay! Worth buying.. Started campaign in VH and two times I was close to restart the campaign because the gauls attack with thousand and thousand men every turn... Now my Caesar is lvl10 and my legion I is lvl8 and I still captured only 1\/2 of Gallia...

I recommend this campaign because is more difficult then main campaign and we need to be more careful with strategic decisions!. great stuff. Brutally hard.. made good progress sowing division among the tribes and conquering others... but now all of Gaul has risen against me. Now struggling to hold onto southern Gaul.. Sets the stage plotwise for the Augustus campaign.

Okay over all, good strategy, and forces you to really strategize which faction is best to subjugate\/remove entirely etc as you conquer your way across the board. Most of my campaigns were also quick, frantic affairs, with lots of back and forth so they were fun when I could get the upper hand, but also run the risk of becoming endless tug of wars.

If you can catch it on sale, i'd pick it up, otherwise don't think you're missing much with the Augustus campaign for free\/If you've ever played as Rome in the Grand Campaign.. As much as I am fond of the game overall, I will have to give this particular DLC a negative review.

Even though the gameplay in itself probably lives up to the name "Total War" better than any of the other games or DLCs in the entire series, the way things have been implemented and simplified doesn't quite look professional. Overall, it feels more like an ambitious mod project, rather than an official DLC.

If something, Caesar in Gaul<\/i> should be free to play rather than something to pay for. Because again, it's not necessarily boring or bad gameplay, just badly polished.. My first time playing the Caesar in Gaul Campaign.
Diffuculty- Very hard
No mods
no cheat

My first impression was that if felt quite easy. I started as the Nervii and made my way through the neiboring tribes and eventaully formed the Galic confederation. At this point i felt that nothing really threaten my confederation until i lost track of Publius Crassus and his legion who continued to harass me with hit and run tactics. Rome is closing on my borders so i decide to unite the tribes and push them back to the Alps.

I get a message saying something about "Rome military expansion" I shrug it off as i know i have them cornerd.
But as i cross the alps who is there to meet me if not Gaius julius caesar himself. And with him stands 10 fully armed legions ready to retake the territory they lost. By that time it was already to late...i lost half of my armies within 2 turns.
The battle for Gaul had just began.