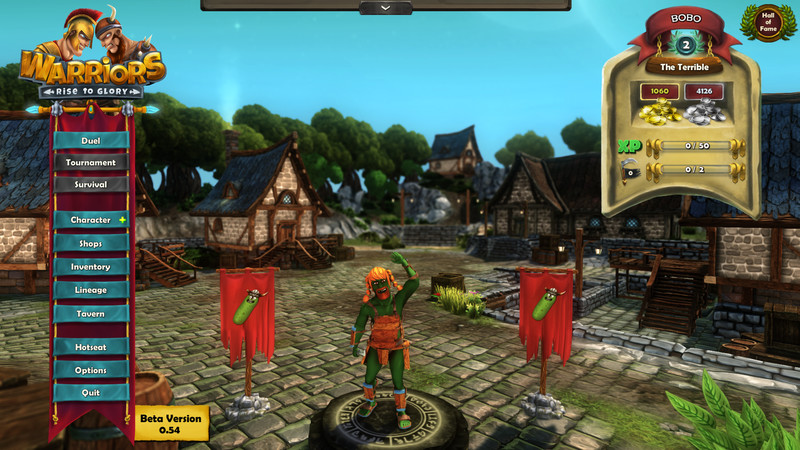 Warriors: Rise to Glory is a turn-based combat game with RPG elements. You play as a fierce warrior, fighting in the arena to become the most feared gladiator in the world to find freedom – and revenge against those who butchered your ancestors! Create a dynasty of (un)honorable warriors and customize their looks, names, honorary titles, and even banners. Fight in duels and tournaments, and please the crowds, so they help you defeating your adversaries. With each victory, you gain XP to improve your stats and acquire new skills – tailored to your unique fighting style. Use your hard-earned money to buy all kinds of weapons and armor – from just a wooden barrel to the mighty armor of a dark elf! When you win, you will have to decide your opponent’s fate which will also affect your path. – you can send him to his maker or… well…

Some warriors will not make it through their epic journey, but do not fret: their descendants will inherit some of their skills and riches, so your seed will grow stronger and stronger, and eventually they will win their freedom back and avenge you – kicking lots of asses in the way!

So what are you doing here, with a mismatched armor, a bloody giant axe, and about to fart in some poor sod’s face? Or, as the poet would say, WTF? The mad emperor Ayziz reigns over the realm of Indiekingdom with an iron fist because, well… that’s what mad emperors do! Ayziz uses his dark powers to open a portal to different timelines and places across the multiverse and teleport thousands of warriors to fight against each other in his pits and arenas for his sick and wicked amusement (did we mention he is mad?). You are one of these warriors – after arriving near naked, leaving behind your home and family, you were told that only the fiercest warriors get their freedom back. You entered the fighting pits knowing that you won’t make it alive… but also that your descendants will keep fighting to find freedom, revenge, and hopefully something nicer to wear than that disgusting loincloth! 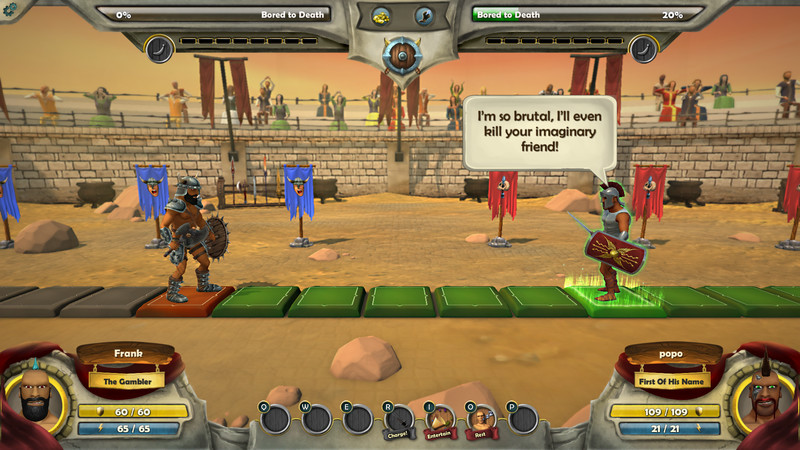 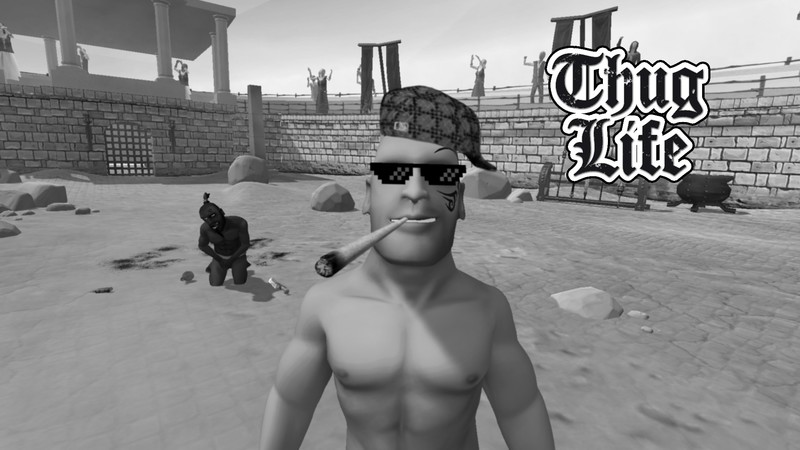 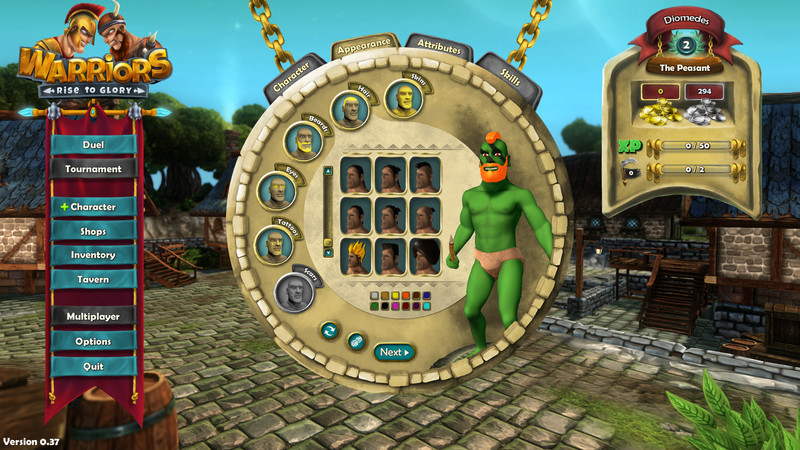 
3D Sword and Sandals? Don't mind if I do!
Although it is in early access, it is very playable on its own, and it seems updates will continue to come including new modes. If you like the game's premise and gameplay seems appealing to you, you will most likely like it, especially considering the price is very generous.. NOTICE: The review is being made pre-easy/medium/hard game mode.

Oh boi, I needed some good old Swords and Sandals and I got it in 3D!
The game was pretty challenging (especially battles with Dead Ned, The Cliff and Azar), but it felt so good after u got "champion title" in the end!
Graphics are pretty cool, there are "meme finishers" and u actually have to grind to win this game - I don't think u can actually win the game on your first run (or can you?), so it's definitely not a "one-run title".

I highly recommend this game for people that loved S&S 2 and wants to destroy some gladiators!

Oh... and I'm in the game, so that's cool (CWANIAK) - at least in polish version of the game!. Cool game, loved the graphics and animations, very funny and full of character's features to mess around with.. What a fun game. This game has strategy, a solid idea, and a fun art style. It is kind of crude and I think that can be a negative at times, but the gore is nice. It has a local versus mode which allows you to choose from a set roster of 5 fully built gladiators.

Reminds me of Swords and Sandals and is worth 10 bucks.. Amazing game. I wish to support it in every way I can. I really wanna see more weapons added, more fatalities, game modes (and a way to start a completely new game without needing to die and have level points carry over to next character, there should be a way to make a completely fresh start), and much more. I'd also love to see this game get online multiplayer, it shouldn't be demanding or difficult since it's a turn-based game. I'm looking forward to everything! (I played over 3 hours on an alt account I'm family sharing to btw).. Fun game to play, but there is a problem i have with the game.
There is only one animation of giving mercy
(farting in their face to incapacitate them).
Also the quests should at the very least make you fight or train
with the quest giver, instead of paying to increase your attributes.. Great game!. -PROs-
It's a good game. Simple and relaxing game play. I enjoy the simple yet challenging game play and buying weapons and armor for my warrior.

-CONs-
The game forces you to die so your next character so your next character can inherit some of the gold, skill points, and 1 piece of armor.. Great game!, I realy enjoyed to gamble in the taverna, the grapic is realy good and funny,
the battels are great too, can't wait for the full version!. Waste of money. That game is really poor, only good skill tree. Gonna be bored after 1 hour. No statistics no nothing.

Welcome again, warriors! While you were out there kinda busy fighting to the death we weren’t idle either: we’ve been working hard in a new update for Warriors: Rise to Glory! for the amusement of the Mad Emperor Ayziz and his crowd of spectators. Today we release Update 0.54, where you will find what you need to entertain your public as they deserve: with great amounts of mindless violence and silly moves! Update 0.54 adds two new execution animations, for the fiercest warriors who never forfeit a life. Inspired by anime action movies, this totally over-the-top animations will blow your enemies’ minds – and quite literally!

Also, this patch adds up to 12 animations for you to entertain the crowds in combat. Taunt everyone by banging your shield, raise your sword to rally their hearts to your side or shake-shake-shake your booty – whatever it takes for them to love you and lend you a hand in combat! We have also added brand new metagame tutorials and something that you had asked for: a Reset Progress option. We’ve got something for German warriors as well: full German language support, so you can mock your opponents in your own mother language! And finally, of course, tons of bug fixes and quality-of-life improvements. Check the full patch notes below!

Let us know what you think of the new executions and entertaining movements in our Discord server[discord.gg] or our social media channels (see below). Good luck in the arena, warriors!

JOIN THE COMMUNITY OF WARRIORS. Update 0.37 is out!:
Greetings fellow warriors!
We have just released update 0.37, and it includes many cool features and changes!


We are happy to announce that this will be the last update before the exciting Early Access launch. Please keep in mind that this is a pre-beta version, so you may encounter some technical issues and bugs.
if you ecnounter any technical issues, please leave us know in the forums.

We are working around the clock on developing and improving the game, so please let know in the forums about your gameplay experience, what you liked and didn't like and what would you like to see next in our game,
To make it as enjoyable and fun as we can for you, The gamers!

So have fun and good luck in the arena!

As we work day & night on patch 0.41 which will come out on Wednesday (2/21/18) and will include HotSeat multiplayer mode!
we want to be as open as possible with our community, so you too can follow our progress at our open trello:
https://trello.com/b/jMmqb2If/warriors-rise-to-glory-roadmap

One of the main goals of this time on Early Access is to get your feedback. Don't hesitate to contact us with your comments of the game in our social media channels
Facebook: https://www.facebook.com/WarriorsRiseToGlory/
Twitter: @WarriorsRTG
Discord: https://discord.gg/ZdZAZ2

And of course our official forums:
http://steamcommunity.com/app/582330/discussions/

If you find a technical issue, please contact us at:
support@gavra-games.com
And we promise to find a solution to your problem as soon as possible!

Greetings, brave warriors! Patch 0.43 is here: the next update of Warriors: Rise to Glory! is now available, with a brand new tournament with its own boss, new weapons and armors, a higher level cap, and Korean localization among other stuff. You can check all the details about this new update below. Enjoy, and good luck in the arena!

Hello brave warriors and welcome to the Indiekingdom news report!

We are happy to announce that Patch 0.57 is LIVE and kicking butt. The patch has many new features requested by our community as well as minor & major bug fixes.

We hope you are all enjoying killing your worthless opponents with the new executions in patch 0.54!

In this patch we have added Mac support! So please welcome all the mac players! If there are any problems, please let us know.

Also, we would like to thank you all for the all feedback and bug reports. All of you helped us making hotfix 0.55, so keep these feedbacks coming!

JOIN THE COMMUNITY OF WARRIORS. Patch 0.44 Is HERE!:

Greetings barve warriors!
As we announced a couple of weeks ago, we at Gavra Games were hard at work preparing the next update, Patch 0.44, with some exciting new features and content for you. The most important one is gamepad controls: from now on, Warriors: Rise to Glory! fully supports gamepads. Local couch multiplayer has a whole new meaning when you can actually sit on your couch with a friend, a gamepad, and the intention of kicking some asses to please the crowd.

We’re adding some new shields to the game (spiked, dark elf, Roman, Samurai, and Homeless shields), as well as a 3rd level tier for a lot of skills. That on top of many fixes, changes, customization, and quality-of-life additions. Check out the full patch notes below. We hope you like this new update; don’t hesitate to join as on our Discord server to comment all the new content and tell us about your experience playing with a gamepad, and remember that we’re open to receiving feedback for future updates. Good luck in the arena!

As usual, we invite you to talk with us on our various community channels.
Official Discord server[discord.gg]
Steam forums
Facebook[www.facebook.com]
Twitter